In previous posts I discussed fuzzy logic and fuzzy segmentation. The main advantage of fuzzy logic is that it gives the possibility of non-binary classifications. A cup of coffee can be hot, partly hot or not hot. It is a scale and not a yes/no question. A customer can be a loyal customer but also somewhat loyal customer and still be interesting for the marketing department.

That this non-binary classification isn’t only interesting for marketing can be illustrated by for example the defintion of alcohol addiction. Such a classification isn’t very easy, it depends on many factors as for example problematic alcohol usage, heavy drinking, not being able to cut down on alcohol usage, etc. And each of those is quite difficult to specify exactly because it is dependent on the sex of the person but also the weight, etc.
The definition for a “problematic alcohol usage” is 15 or more glasses per week for women and 21 for men. A heavy drinker is a person that drinks at least once a week more than 4 glasses for women and 6 for men. There are other factors that one should take into account to define alcoholism, but let’s simplify the defintion to these 2 properties, just as an example.
Does this mean that if I drink 21 glasses per week and in that week 2 days with 5 glasses I don’t have a problem? Or is it less binary? And if we have fuzzy values we could define problematic drinking as ‘heavy drinker’ and ‘problematic usage’ and ‘problems with decreasing usage’ for example. This gives us not only a better definition but also doesn’t remove an ‘upcoming problem’ from the radar. A person slowly appears and not at once.

But sometimes even this linear relation isn’t enough. Let’s illustrate this with the easy example: age.

The question ‘is a person young’ can be a difficult question to answer. It depends very much on the context, ask this to students on the university and to people in a retirement home. The answer, and definition, is a totally different one. But when we ask people on the street what is young and old we might come with the following answer: people seem to agree that everyone below 25 is young and everyone above 65 is old. People seem to disagree about the ages in between 25 and 65 years.

now we can use this formula to define is someone is young. 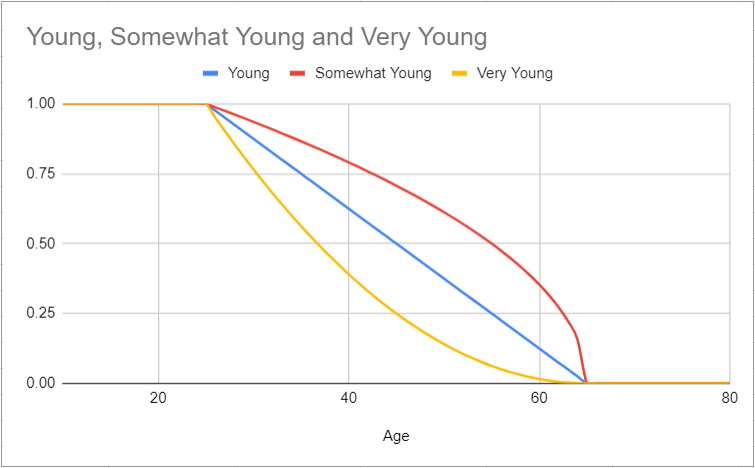 Because we now know if someone is young we also have a definition of not-young: 1-young. So if someone is 0,80 young he/she is 0,20 not-young. But maybe we get a question of marketing to use ‘somewhat young’. In this case the group <25 still is young and >65 still is old but within the 25-65 region we can have a curve that has a preference for younger people.
This can be done by boosting the fuzzy membership. There are 2 different methods:
exponential or a root-function. In the example show in the graph you see the linear function for Young, SquareRoot(Young) as Somewhat Young and the exponential function Young*Young as Very Young.

This might also be a solution for the defintion of alcoholism: very heavy drinker and problematic usage and somewhat difficulties to drink less.
We still use a fuzzy definition (people don’t just pop on the radar but it is a process) and we have the advantage of a non-linear membership where a membership is exponential when one gets near the limit (of 21 glasses per week for example).

We use cookies to ensure that we give you the best experience on our website. If you continue to use this site we will assume that you are happy with it.Ok